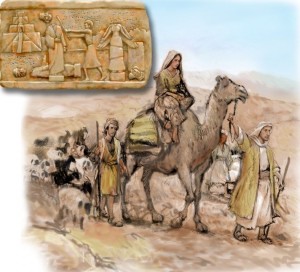 Pregnancy – you might desperately long for it, or recoil from it. It might evoke unbelievable joy or the depths of despair. It’s a fair call to say this is one situation that almost never creates a wholly neutral emotional response. There are many reasons why a positive pregnancy test might terrify a woman. And more so than most women, Hagar -the Egyptian slave with whom Abraham fathered his first child – had every right to be terrified. Let’s take a look at her background and what brought her to this place.

How did Abraham and Sarah come to have an Egyptian slave?[1] Some years earlier, famine had forced Abraham and his household into Egypt. Abraham was afraid that he would be killed by the Egyptians so they could take his beautiful wife, and therefore pretended she was his sister. I have to say that I struggle with this one…surely there was some other way. However, I think we need to consider two factors: the nature of the society of the time, which was ruthless and violent, and the scant state of moral knowledge. I do not want to excuse Abraham’s actions, but I do want to put them in their historical context. We cannot judge the past on the basis of contemporary ethics.

Kings of that time were not the rulers of vast territories as we would understand a king to be – they were more tin-pot local warlords ruling a particular city and its surrounds. More remote locations, such as deserts, might have no ruler at all. There were constant power struggles; sometimes with several kings ganging up on a number of others to try to enlarge their territory, such as was the case in Gen 14:1-11. Wealthy and powerful men like Abraham, even if they did not call themselves kings, had trained warriors at their command. It is unlikely that they would have resembled today’s professional standing armies in any way – the men would have had other jobs most of the time, such as herding sheep, cultivating the land or carpentry. But when Abraham needed to rescue Lot, “he called out the 318 trained men born in his household and went in pursuit…”

There appears to have been widespread assumptions by gangs of men about their rights to the bodies of others. We see this in Sodom, where “all the men from every part of the city of Sodom – both young and old – surrounded the house. They called to Lot, ‘Where are the men who came to you tonight? Bring them out to us so that we can have sex with them’” (Gen 19:4-5). Lot, to his discredit, offers his virgin daughters as a substitute. Thankfully for all concerned, the two angels who were staying the night took matters into their own hands, and blinded the men of Sodom, giving Lot and his family a chance to escape. Similar behaviour happens some time later in Judges 19, when the Benjaminites demand that a householder in Gibeah should hand over a Levite traveller who is spending the night in his home, so they could have sex with him. The traveller’s concubine ends up being given to the men, “who raped and abused her throughout the night,” resulting in her death.

It is easy to sit back in our largely law-abiding society and pronounce judgement on Abraham for pretending Sarah was his sister, but it is entirely possible that he was right about the dangers faced – he knew the circumstances and the reputation of this particular Pharaoh. He certainly believed that the likely outcome of the discovery of Sarah’s beauty would have been his death, and presumably, he must have had some basis for this belief. If Abraham had been killed, the immediate result for Sarah would have been the same (that is, being taken into Pharaoh’s household), but the long-term future would have been very different – she would not have had that hope that one day, she would, by some means, be able to be reunited with her husband. If Abraham had died, God’s promise to the couple would have gone unfulfilled. Yes, it seems to us that Abraham did the wrong thing, but we can’t know if he had other reasonable options[2]. We don’t know if he cried like a baby every day over having to choose between a rock and a hard place, and because he missed her and feared for her. We judge from a privileged position and don’t know what it’s like to be in a situation where all your options have run out to the extent Abraham’s did.

We can reasonably infer that being taken into Pharaoh’s palace meant that Sarah was made a wife or concubine of Pharaoh. There is no indication that Abraham saw her as being “soiled” sexually or morally because of circumstances that were outside of her control. Abraham’s connection to Sarah resulted in him being granted sheep, cattle, donkeys, camels and servants (Gen 12:16) – quite likely a bride price paid to him as her closest relative. These resources add to the possessions and people Abraham had earlier accumulated in Harran (Gen 12:5) and became the foundation of Abraham and Sarah’s future wealth. Sarah must have been exceptionally beautiful to attract such a price. It is almost certain that Hagar was among the female slaves acquired in Egypt.

Whether one was male or female, the ancient world that Hagar, Sarah and Abraham lived in was a dangerous and uncertain place.

Abraham & Sarah had a lack of moral knowledge

The information about the violent society Abraham belonged to gives us some insight into the general lack of moral knowledge at the time. Clearly, there was some knowledge of God – Abraham would build an altar wherever he set up residence for any period of time and was counted a prophet, and Melchizidek, the king of Salem, is described as being a “priest of God Most High” (Gen 14:18-19). Presumably, they knew the stories of their ancestors Adam and Eve, Cain and Abel, Noah, and the tower of Babel, so they had some basic concept of sin and righteousness. But what specifically did they know about what constituted sin or how to live righteously? Simply, we don’t know. If they knew the story of Cain and Abel, they knew that murder was wrong in God’s eyes. They did not have a strong enough concept of “one flesh” marriage to have been able to join the dots and work out that polygamy was not God’s will.

Don’t forget that Abraham predates Moses by four generations. This means that God’s Law had not yet been given – not even the Ten Commandments would come into being until Moses’ time. I have heard it said that Abraham must have married Hagar because the law prevented men from sleeping with their female slaves (marriage would have elevated Hagar’s status), it is important to understand that Leviticus 19:20 did not yet exist. Furthermore, the use of concubines seems to have been quite common, so there is no good reason to suppose that Abraham must have married Hagar. She is still referred to continually as a slave, not a wife or concubine.

Sexual ethics were, by our standards, extremely questionable. Revolting, even.  When Lot and his daughters settle in a remote cave, the two women decide to get their father drunk so that they may become pregnant and bear children (Gen 19:30-38). Sarah was, in truth, Abraham’s half-sister (Gen 20:12). There are other incestuous or consanguineous relationships within Abraham’s wider family.

Exactly what moral knowledge they had is uncertain, but in comparison to what the Israelites would receive from Moses a few generations later, it would have been patchy and incomplete.

The political/cultural background to Hagar’s situation is tumultuous, violent, and highly fragile. Religiously, it takes place before the Law is given, and moral understanding appears to have been incomplete. These factors have an enormous impact on the events which unfold. The next post will explore Hagar’s relationships, actions and struggles in more depth.

[1] At this point in the story, the couple is still called Abram and Sarai, but I am using the more familiar names throughout.

[2] Abraham also pretended Sarah was his sister in Gen 20, and she was taken as a wife by Abimelek king of Gerar. There is no information given in this instance about Abraham’s rationale.