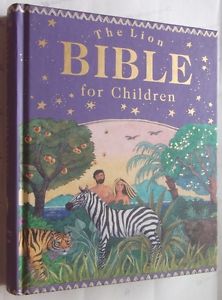 Introducing a new series, “Children’s Bibles and Bible Story Books,” in which we will be looking a how women are represented in these books.

We don’t arrive at adulthood as a clean slate, without preconceived ideas about gender. Throughout childhood and adolescence, many factors subtly or overtly contribute to building our concept of gender by the time we become adults: toy choices, media, observations of our parents’ or other relationships, clothing choices, and so on. Similarly, our ideas about the Bible and theology don’t just come from the sermons we hear, studies we attend, or from the Bible itself – it took me quite a while to realise that much of what I thought I knew about eschatology was vaguely cobbled together from the illustrations of old children’s books. They had a powerful impact on my imagination. Our understanding of gender can be like that too – often, we don’t really know where it came from, but it becomes part of how we see the world, even if we don’t realise it. Many Christians, men and women, do not know the stories of women in the Bible – something which contributes to an unbalanced notion of how significant women are in God’s story.

The children’s Bibles and Bible storybooks we read to children or give them to read for themselves can have a powerful impact on what they discern about gender in God’s kingdom, including whether they are fully loved and accepted by God or whether they have certain unalienable rights over the opposite gender.

Of course, you won’t usually find a story on 1 Timothy 2:8 in children’s Bibles! But you do find plenty of other stories which deal with women, so this will be the first in a number of posts in which I will review children’s Bibles and other Christian books to see how they rate on this issue.

I will evaluate the children’s Bibles on the basis of a number of particular criteria, rating each one 0-3 stars:

Format: This children’s Bible does not only include narrative stories, but also includes excerpts from Psalms, stories based around the teachings of some of the prophets, parables and other teachings of Jesus, and brief stories based on segments of Paul’s epistles. Stories are not limited to a set length, but are mostly between half a page and two pages long. Being aimed at pre-teens, the illustrations are fairly realistic (unlike the more cartoon-like style in many Bibles for smaller children), rich and detailed. The author has aimed at presenting an accurate retelling. The biblical reference for each story is included under its title.

Note that only the first 2 points – Creation story and women in the Old Testament – are covered for this Bible in this post. The last 2 points will be dealt with in Part 2.

The Creation is divided into 3 stories, all of which include the first man and woman. “The Creation” (Genesis 1) depicts God making man and woman in His own image, using the more accurate terminology of “human beings” (rather than the older “man”) to describe who it is that is made in God’s image. In “The Garden of Eden” (Genesis 2), after Adam names all the animals, it says, “But there was no special companion for him.” God then says simply, “’It is not good for man to be alone like this,’ God said.”

While it does not introduce the concept of a strong rescuer who was the man’s equal (an ezer kenegedo), it avoids any depiction of the woman as a subordinate assistant. This story ends, “They lived together in harmony with each other and their world.”

A small error creeps into “Creation is Spoiled” (Genesis 3), when it states “(The snake) saw the woman sitting by herself…” Adam is depicted as arriving after Eve has eaten the fruit.[2] The man’s response to God when He finds them in the garden is depicted accurately. The woman’s response to God, “’The snake,’ she said. ‘It was his fault. He tempted me, so I ate it,’” takes some creative liberties. In contrast, her response in the NIV2011, “The snake deceived me, and I ate,” seems more a description of the facts than this strong attribution of blame to another.

The description of the consequences of the Fall is presented very equally. “He turned to the man and woman and told them that, through their disobedience, pain had come into the world. From now on, their lives would be marked by hardship and suffering.”

Remaining true to the Hebrew text, the man and woman are not named as Adam and Eve until Genesis 4.

Overall, the story is depicted with accuracy, with a couple of exceptions, presenting an overall picture of equality before the Fall.

The Lion Bible for Children covers 139 Old Testament stories, presented chronologically, making it easy to follow the twists and turns of the larger story. 29 stories focus on women.

Another time, when the Israelite people were in great trouble again, God sent a wise and courageous woman named Deborah to their rescue. She sorted out every argument and problem and became famous as the best judge in Israel.

Her role as military commander is made clear – “she prayed to God for wisdom and formed a battle plan with great daring.” It ends with the words, “Deborah’s prophecy had come true. A woman had won the victory for the people of Israel.” Her roles of prophet, judge and military leader are all acknowledged.

Two notable omissions are Abigail (1 Sam 25) and Huldah (2 Kings 22, 2 Chron 34). Both stories (particularly Huldah’s) are more significant in the trajectory of Israel’s story than a story like Solomon’s judgement about the mother of the baby in 1 Kings 3. The story of the rediscovery of the book of the Law in the temple is told, so it is concerning that the prophet Huldah’s pivotal role is written out. It appears in this telling that the revival in Israel was King Josaiah’s doing almost single-handedly. If not for this omission, The Lion Bible for Children would have received 2.5 stars instead of 2 in this category.

In addition to the many stories of women included, there is an effort to depict women in many of the scenes where there are groups of worshippers or spectators.

Overall, Watts has done an excellent job of depicting the women of the Old Testament, with just a couple of disappointing omissions and errors.

You can follow the God’s Design – Perth blog via  our Facebook page or by signing up to receive posts by email…or preferably both . From time to time, additional items of interest are published on the Facebook page, which are not found on the blog. However, Facebook does not show all those who “like” the page all of my posts all of the time. To be sure you will not miss out on great content, I would like to encourage you to sign up for both.

[2] Gen 3:6 makes it clear that “her husband…was with her.” Languages which have a plural form of “you” (unlike English), such as German and the original Hebrew, make it clear that the serpent addressed “you (plural).”