This picture is a fairly perfect portrayal of the vision complementarianism (the theological view which holds that men and women have different and distinct “roles” in the church and family) has for marriage. The helpless woman waits patiently in her precarious position until the brave and manly firefighter ascends his ladder to rescue her. His is the active role, hers the passive one. Her happiness, security and all she is and longs to be relies wholly on him. 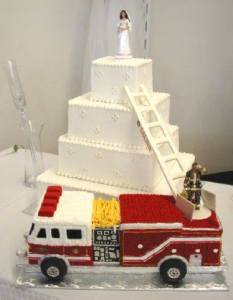 On this matter, complementarianism is wrong.

Genesis 2 paints a very different picture to the complementarian view. “Hold on,” you say, “isn’t Genesis 2 the bit that puts the woman in the position of ‘helpmeet’? Doesn’t all that ‘man as leader, woman as underling-helper-assistant’ stuff start here?” Well, no. Let’s take a closer look.

As we look into the Garden of Eden, we see the man waiting, lonely and alone. Despite the beauty and abundance of the world God has created for him, something is missing. His future can’t truly begin without someone else to share it with. But God already has a solution in mind. After God brings before him a parade of animals – proving to him that what he so deeply desires can be found nowhere in all of creation thus far – his aloneness is confirmed.

God puts the man in to a deep sleep and performs an operation like no other. From the side of the man, he creates another human – the woman. Before donning his surgical gown (figuratively), God sets forth his purpose in this act. “It is not good for the man to be alone. I will make a helper suitable for him” (Gen 2:18, NIV).

“Hmm,” you say, “A ‘helper.’ Just a little condescending, don’t you think? Not an equal…but a mere helper to the boss-man. Hmphf.” Running through your head are images of “Mummy’s little helper,” recklessly wielding a wooden spoon while gobs of chocolate cake mix fly round the kitchen. Mummy has done all the real work. Little Jimmy has – with strong supervision – poured the already measured cup of flour in (only spilling about a fifth of it), wandered off in the middle of proceedings to play with his Thomas trains (getting smears of gooey, chocolaty mixture all over them), and has come back only to lick the spoon and stick it back in the bowl…ewwww. “Ooh, look Daddy – see the lovely cake Little Jimmy has made!” coos Mummy. Mummy and Daddy both know full well that Little Jimmy has done almost nothing of use, and plenty that has hindered rather than helped, but they indulge the fantasy that he made it all by himself. “Hmm…well, if this is what God means by calling the woman a helper, count me out,” you’re thinking. (Sorry, I was having a bit too much fun with that image.) Even if your picture of “helper” isn’t quite so condescending, you are probably still perceiving it as indicating that the woman is subordinate.

Let’s back up a little and see what God really has in mind. If we look at the Hebrew word used here, ezer, we will find that it occurs 22 times in the Hebrew text. Twice, it describes Eve here in Gen 2:18, and 20, and three times, it refers to Israel’s military allies. What of those other 17? Well, they are all verses about God. Yes, God – you know, “our help and our shield” (Ps 33:20), and “my help comes from the Lord” (Ps 121:2). Most of the usages have a strongly military flavour, and describe a strong and powerful rescuer.  We seem to so often hear today that the man is created to be the rescuer and the woman to be rescued. The Bible says otherwise – the first woman was created precisely to be the ezer – the strong rescuer – of the first man. Stop for a moment and just take that in. Woman was created as man’s strong rescuer.

Okay, so does this put all women in charge of all men for all time? Well, no, because the complementarian view gets it wrong twice – firstly in understanding that “helper” indicates “one who is subordinate,” and secondly in believing that this verse establishes this subordination for all time. The hint is in the next word, kenegedo, meaning “corresponding to,” “equal to,” “face-to-face with.” Man’s helper would not lord it over him, or leave him constantly in a place of needing to be rescued. She would be his equal. Sometimes, he would need a powerful rescuer. Sometimes, she’d be the one in the position of need. On other occasions, they’d work side by side, just as God intended when He gave them joint dominion over His world back in chapter 1. (Turns out this 1965 classic could be just as easily sung by a man as a woman…)

God’s plan of mutual submission was laid out right there in the Garden of Eden. From that day to this and beyond, God planned that men and women would give each other strength, courage and support in the journey of life, standing face to face, as equals.